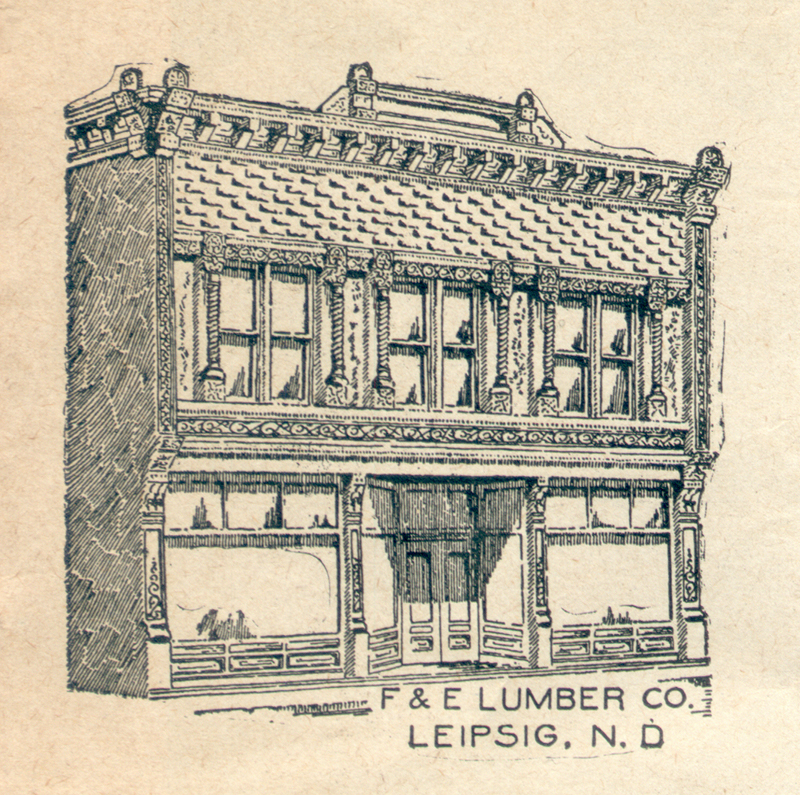 2,000th Mesker came in December, 2011 and #3,000 in June, 2013. Two years later we have documented the 4,000th entry into the worldwide Mesker facade database. The Hertz Bros. Hardware Store, located at 46 Main Ave in New Leipzig, North Dakota, features a complete building front by George L. Mesker & Co. including cast iron storefront columns, wooden storefront, and a highly decorative galvanized sheet-metal upper story and cornice. The cornice wraps around the corner and continues along the entire side elevation. Rendering of this impressive facade was featured in the 1911 George L. Mesker & Co. catalog; it was purchased by F & E Lumber Co. With the exception of a few blocked window openings, the facade is remarkably intact and nearly identical to its catalog likeness (which isn’t always the case). The building is only the third Mesker identified in North Dakota.

I was fortunate to have the opportunity to announce the milestone during the 2015 Illinois Main Street and Historic Preservation Conference in Carbondale, Illinois. Since ‘got mesker?’ is about historic resources in downtowns and this year’s statewide conference for the first time combined Main Street and preservation, it seemed especially appropriate to make the announcement during the event. After all, ‘got mesker?’ was publicly launched as an Illinois-based initiative at a statewide historic preservation conference 11 years ago, in Grafton, Illinois.

Here are the statistics regarding the 4,000 buildings that make up the database (it’s interesting to compare these to the previous milestones):

Thank you to all who have contributed to this identification effort. Special thanks go to Roger Waguespack and James Whitlow who submitted numerous examples, many from remote locations that I would not have been able to find otherwise.

The search for #5,000 has already begun. It may take a couple of years, but it will be done!