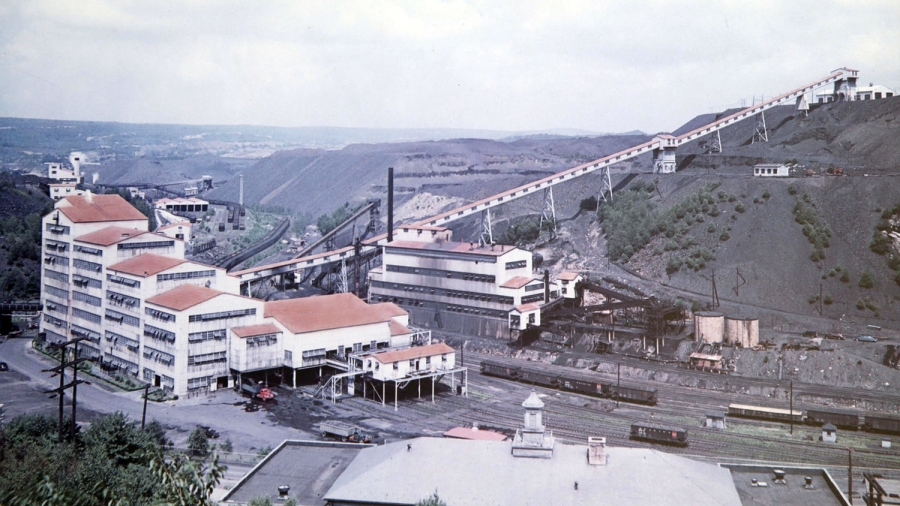 Mesker #2,000 came in December, 2011, #3,000 in June, 2013, and #4,000 in June, 2015. Three years later and fourteen years since the launch of the ‘got mesker?’ initiative through the Illinois Historic Preservation Agency (now the Illinois State Historic Preservation Office in the Department of Natural Resources), the 5,000th building with Mesker-manufactured components has been documented. This milestone was a major long-term goal of the initiative but when it started with just a few dozen buildings, it seemed impossible or at least very remote. At some point along the way, however, it became just a matter of time.

The 5,000th Mesker is an important one and not merely because of the milestone. It was an impressive remnant of a once essential and thriving industry. The St. Nicholas Coal Breaker on Suffolk Road near St. Nicholas, Pennsylvania, was completed in 1931 by the Philadelphia & Reading Coal & Iron Co., America’s largest producer of anthracite coal from 1871 through the 1920s. The size of a city block and capable of processing 12,500 tons of coal per day, it was one of two largest coal breakers in the world; the other, also owned by P. & R. C. & I. was nearby in Locust Summit, Pennsylvania. Invented in the 1840s, breakers were critical to the voluminous coal production process as they transformed large, hard-to-ignite chunks of raw anthracite—hard coal with the highest carbon content—into a variety of smaller sizes suitable for smelting iron, propelling a locomotive, running a machine, or heating a building. A conveyor carried raw coal from the top floor of the breaker through a variety of crushing devices and screens to the bottom, where the finished product—given names like egg, stove, chestnut and pea, according to size—was loaded onto rail cars and taken to cities across America.

The massive St. Nicholas Breaker was constructed using 3,800 cubic yards of steel, 10,000 cubic yards of concrete and contained 1.5 miles of conveyor lines, 20 miles of pipes, 25 miles of conduit, 118 miles of wire, and 26,241 square feet of rubber belting. Not to mention hundreds of industrial steel windows manufactured by the Mesker Brothers Iron Company, who featured a photo of the building in its 1936 catalog.

Coal breakers gradually disappeared as anthracite production began a long, steady decline after World War I. The St. Nicholas Breaker would eventually meet the same demise, which began when it ceased operations in the late 1960s. After decades of vacancy, in the early 2000s there were proposals to make it a historic site. Although such a plan was found to be prohibitively expensive, there was rekindled interest among mining history enthusiasts and photographers of industrial decay whose extensive documentation of the building is now easily accessed online. In 2013, a slow demolition campaign was begun by the new owner, the Reading Anthracite Company. After several years of slow dismantling, this last massive surviving breaker from the heyday of coal production was finally demolished in a controlled explosion on March 15, 2018.

Here are some statistics regarding the 5,000 buildings that make up the database (it’s interesting to compare these to the previous milestones):

Thank you to all who have supported and contributed to this identification effort over the years. Special thanks go to Roger Waguespack and James Whitlow who continue to submit numerous examples, many from remote locations that I would not have been able to find otherwise. A special shout-out goes to Mike Jackson who started me on this journey (or obsession?).

So what’s next? While reaching 5,000 was a goal, I can’t say that I have another milestone in mind. This doesn’t mean that the identification effort stops here—after all, Meskers #5,001 and beyond are already waiting to be inventoried. Aside from that, it is time to take stock of what we’ve discovered, analyze and learn from it, and protect what’s left. We will continue on this Mesker journey, which as the St. Nicholas Breaker demonstrates, is a journey through America and its history.