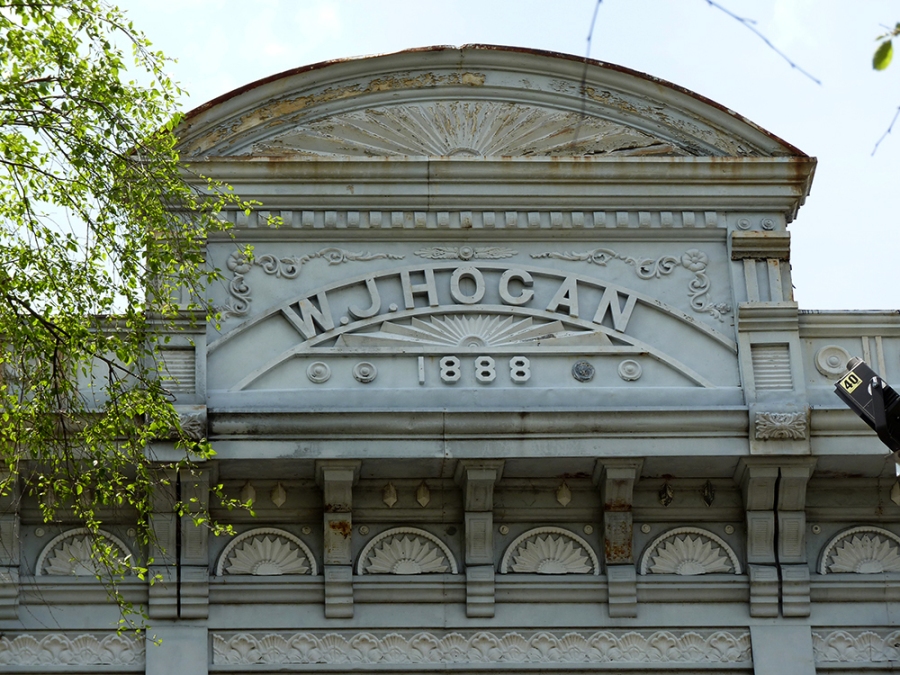 It’s been nearly two years since I profiled Natchez and Yazoo City for their large Mesker enclaves, in Mississippi Found. With three Mesker facades recently located in Woodville, Mississippi is the 10th state with at least 100 identified Meskers. These ten states—IL, IN, MO, TX, KY, IA, KS, CO, WY, and MS—account for 2,737 of the 3,715 buildings (74%) in the database. Mesker #100 was reported by Roger Waguespack—a one-story building on Commercial Row with a sheet-metal cornice and panels imitating rock-faced stone made by Mesker Brothers Iron Works (adjacent to the post office in this photo). Two additional Meskers were identified while “driving” in Google Streetview—Woodville Town Hall at 510 Main Street has patented adjustable window hoods also by Mesker Brothers, while a one-story building at 643 Main Street has a full galvanized iron front (even the storefront columns are clad in sheet-metal) and millwork by George L. Mesker & Co. (adjacent to the Sam Rosso Building in this photo). While unconfirmed, it is very likely that this is the same building mentioned in the 1905 testimonials catalog with G.A. Wettlin as owner. The Mesker Brothers facade on Commercial Row has an added distinction of being the 1,000th full-iron façade by the St. Louis company alone. 10 states with 100 Meskers and 1,000 Mesker Brothers “house fronts”—powers of ten anyone?

While Roger along with James Whitlow of Hoxie, Arkansas, identified practically all of the existing buildings on the list, additional historic locations were garnered (also by Roger) through the Cooper Postcard Collection of the Mississippi Department of Archives and History. The digital collection does not identify or distinguish Mesker façades from others, but the photographs are available at a high enough resolution for us to recognize any potential suspects. A few of these images are reproduced below. I can’t thank Roger and James enough for their volunteer efforts in cataloging these buildings and kindly sharing their images.

The inventory of the 102 facades in Mississippi is as follows (for a detailed Excel inventory click here; you can also view a Google fusion table map here):

And here are a few favorites, appearing in alphabetical order, by town (for images of Mesker facades from Natchez and Yazoo City, please see the original Mississippi Found):